Games To Play While Waiting For Pie On Thanksgiving

Hours of cooking have ended....the feast consumed...now you have several hours to digest before pie is served.  What should you do?  #PlayMoreGames!

Here are 5 games to play on Thanksgiving to help you avoid food coma.  Click on any title to be taken to the game in our eBay store. 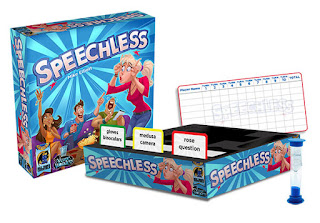 Players in Speechless take turns being the “presenter”. The Presenter will act out 6 words, trying to get the other players to correctly guess what word they are acting out. They only have 90 seconds to do this! In Speechless, cards are separated into 3 decks by color and difficulty:

Easy cards are Green, Medium cards are Yellow, and Hard cards are Red.

While the presenter is acting out the words, the other players are watching and trying to guess what word is being acted out. If they think they know the word, they write it down on their marker board with their dry erase marker.

Both presenter and the other players are not allowed to talk during the acting!

After all guesses have been revealed for that word, the presenter then reveals what the actual word was.

However…If a player did not guess the correct word, but at least one other player made the same incorrect guess, all players with the same guess score 1 point!

Bound to bring bouts of laughter and memorable moments for all players, the sheer fun and enjoyment Speechless brings on game night truly makes this an Essential game for any collection! 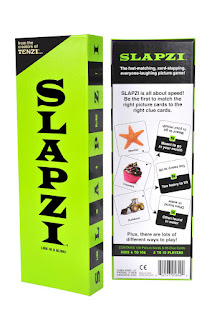 A fast-paced, strategic matching game perfect for the whole family!

The rules are simple: Players get 5 double-sided picture cards that they must lay out in front of them. A Clue Card is drawn and placed in the middle of the table and the first person to find an appropriate Picture Card to match the clue must quickly slam their card down on the Clue Card and yell, "SLAPZI!"

At this point in the game other players have the opportunity to challenge whether or not the Picture Card matches the clue; if it doesn't, the player who slammed it down must take it back and also draw an extra Picture Card to add to their 5.

The first player to get rid of all of their cards wins!


Happy Salmon is the simple, fast-paced card game packed to the gills with high-fivin’, fin-flappin’ fun. Actions including the classic "High 5", the unifying "Pound It", the frantic "Switcheroo", and the delightful “Happy Salmon” will leave players doubled over in laughter. With so many mini-celebrations built into the play, it’s the happiest game ever!

Everyone calls out the action shown on their top card.
When two players have a match, they celebrate by performing that action together, then discard their top card.

The first player to match all of the cards in their deck wins! 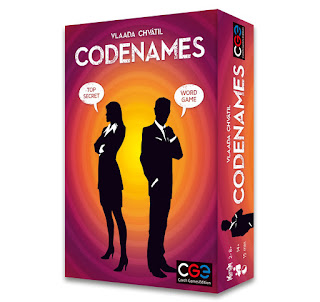 The two rival spymasters know the secret identities of 25 agents. Their teammates know the agents only by their CODENAMES.

The teams compete to see who can make contact with all of their agents first. Spymasters give one-word clues that can point to multiple words on the board. Their teammates try to guess words of the right color while avoiding those that belong to the opposing team. And everyone wants to avoid the assassin.

Codenames: win or lose, it’s fun to figure out the clues.

What are these strange symbols on the map? They code for locations where spies must contact secret agents!

Two rival spymasters know the agent in each location. They deliver coded messages telling their field operatives where to go for clandestine meetings. Operatives must be clever. A decoding mistake could lead to an unpleasant encounter with an enemy agent – or worse, with the assassin!

Both teams race to contact all their agents, but only one team can win.

Codenames: Pictures differs from the original Codenames - Pictures in that the agents are no longer represented by a single word, but by an image that contains multiple elements. 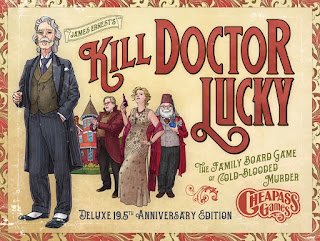 You've hated Doctor Lucky for as long as you can remember, and this is your perfect chance to take the old man out. And unbeknownst to you, everyone else in the house wants to kill him too.

But he's not called "Doctor Lucky" for nothing. He has an uncanny knack for staying out of harm's way.

Take heart. Persevere. Someone is going to kill Doctor Lucky tonight, and it might as well be you.

This is the 19.5 Anniversary Edition of Kill Doctor Lucky, a classic board game from the late 1900's.

What is your favorite game to play with your family on Thanksgiving?  Let us know below or send us a tweet @howlingfungames, use #FoodComaGames.
Posted by Alpha Wolf at 9:51 AM