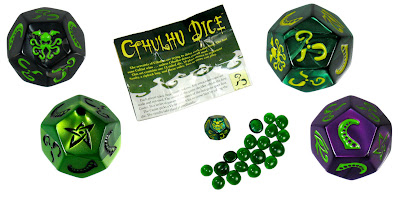 Serving Cthulhu is fun . . . except for all those other cultists out to get you. So get them first!
Cthulhu Dice lets you drive your rivals mad . . . very, very quickly. Players take turns rolling the big, beautiful, custom 12-sided die, embossed with tentacles, Elder Signs, and more. Destroy your opponents' sanity! Better yet, steal it. But watch out for Cthulhu – when he comes up, he takes sanity from everyone! 18 glass Sanity marbles are included. Lose all your marbles and you're mad.

The last sane cultist wins . . . unless everyone goes mad together. Then Cthulhu wins!

Be the only play that has not lost their marbles!

Give each cultist (player) 3 of the sanity marbles.

Based on the symbol rolled, these are the possible actions:
If you lose all your sanity marbles, you go mad...but you are not out of the game.  You cannot be attacked, but you can attack.  You might get lucky and roll the Elder Sign and get sanity back from Cthulhu, but you cannot get sanity back from another player by rolling a Tentacle...that sanity goes to Cthulhu instead.

When only 1 player has sanity marbles left, the game is over and that player wins...unless all players have gone mad, then Cthulhu wins!

This is not a deep game...it is COMPLETELY luck based.  I played it with 2 players, which was not much fun...there was too much thinking about what kind of roll is being taken.  "This is my counter attack to your attack"  then "Now I am attacking".  We did however, try the Rival Cults varient where each of us played 3 Cultists.  That was a much more interesting game...seems like more players is better.

There are several color options for the die, which makes it collectable if you are into collecting dice.  The components are nice an compact, they give you a plastic Ziploc bag to keep everything together.

Overall, it was fun, but I don't think this will ever be more than a filler game...which is really what it is intended to be.  It is a good way to spend some time if you are waiting for a spot to open at a gaming table.  Overall, I would give Cthulhu Dice a 6 out of 10.

You can buy Cthulhu Dice in our eBay store (www.howlingfungames.com) or in our Amazon Store

or by contacting us directly.