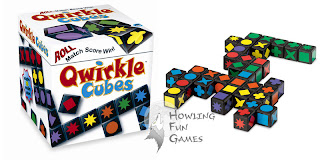 The follow-up to one of the most awarded games of all time! Qwirkle Cubes plays much like the original Qwirkle game--create rows and columns of matching colors or shapes to score the most points--but adds to the strategy because you can roll your cubes for more chances to play the exact shapes you want! Also, because everyone plays open-handed, you can analyze your opponents' future moves

Each player draws 6 Qwirkle Cubes from the draw bag and rolls the cubes.  Each cube has 1 color and 6 different shapes.  The player that can play the most cubes (to make the longest line) goes first.  The starting player then draws enough cubes to bring his hand up to 6 cubes.  The player on their left goes next.

On their turn, each player has the option of re-rolling any (or none) of their cubes.  They then decide which cubes to add to the game area.  Any cubes added must be added in a single line, so they must share either color or shape.  For example, if there is a line on the table with a blue diamond, blue clover, and blue square, then the player can add a blue circle to the line.  Alternatively, they could also start a new line by playing a green diamond and a red diamond on the blue diamond.  It is also possible to create a new line by playing a blue circle, green circle, and purple circle to the line.  This sounds a LOT more complicated than it really is...

Once the player has played and scored their cubes, they draw enough cubes to get the hand back to 6.  They roll the new cubes before adding them to their hand.  As a result, opponents can see what cubes all players might have to play on their next turn...this is a major difference from the original Qwirkle game.

The game continues until a player plays their last cube.  That player gets a six point bonus.  The player with the most points wins.

Qwirkle cubes has quickly become a favorite at our house.  We have played it with 2, 3 and even 5 (more than were it was designed for).  All group sizes played well...a definite plus for the game.  This is an easy game to learn, after a couple rounds new players will have the game-play down.  I give Qwirkle Cubes a 8 out of 10.

You can buy Qwirkle Cubes (and the original Qwirkle)  in our eBay store (www.howlingfungames.com) or in our Amazon Store

or by contacting me directly.
Posted by Alpha Wolf at 8:34 AM